Experience Utrecht Central Station, one of Hollands largest public transport terminals. And learn more about the architecture and city planning of the large urban renewal program around it on this walking tour Central Station Area.

In 2002 the population of Utrecht chose by referendum for the transformation of the central station area. Goal was not only to transform Netherlands busiest and most connected railway station to one with more capacity, but also to connect the area with the historical inner city. The inner city, the shopping mall Hoog Catharijne and exhibition hall Jaarbeurs were poorly conneted due to road and railway infrastructure. By reshaping public space in favor of bikes and pedestians, by building renewal and adding new functions in the area, Utrecht’s city center expanded beyond Central Station meeting the needs and growth of future Utrecht.

After making the Master Plan in 2004, thight coalitions were made between the municipality of Utrecht and railway authorities and private property owners to make plans for different subareas. Especially the last few years the area underwent some major changes. After the rise of the first new eye-catching Rabobank (opened in 2011) new buildings appeared in Utrecht skyline. A large music palace (2014) on the edge of the old inner city opened, designed by Herman Hertzberger who also designed the old music hall on the same location. Central Station has been renewed with a large ‘wave’ roof by architect Benthem Crouwel Architects, and on the west side of Central Station Area a new City Office (City Hall) is now housing most of Utrecht municipality. 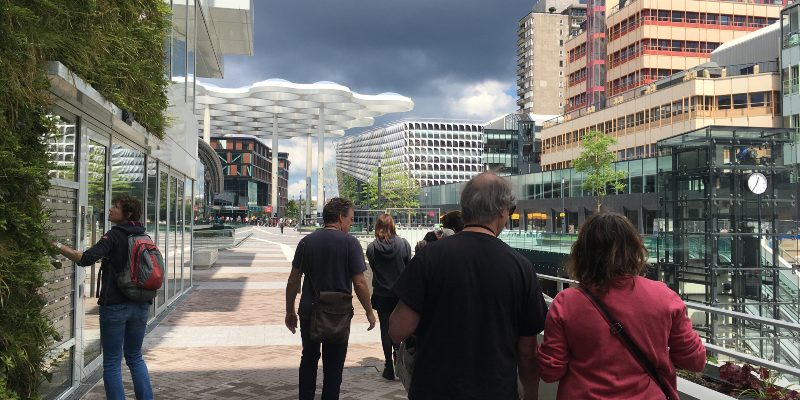 Meanwhile public place has been completely transformed. With new squares and streets – partly on top of a three story bike garage (the world’s largest!) – along the new station hall and a bridge for bikers and pedestrians between Rabobank and the inner city.

A mega cinema and WTC opened, and new high rise hotels (Galaxytower), offices and apartments are under construction. The shopping mall which connects Central Station and the inner city has been renovated, and new parts added. The old Catharijne canal which runs underneath was brought back and flows again, completing the Singel around the historical city centre.

The history of the area, the changes and future plans will be shown, visited if possible and explained during this 1,5 hours walking tour.

The tour starts at the information center of the Central Station area, where models and interactive computer animations illustrate the plans.

You can also book this tour in combination with a tour in the new City Hall (Kraaijvanger Architects, 2015).

Bookings
You can book a tour via the application form, see link below:

NAAR TOP
Back to top